Prabha Ki Diary is concerned as one of the sizzling web shows of Ullu. It is again gearing up for its upcoming special. The sequel Titled as Prabha Ki Diary Honeymoon Special season 2. It is sure that the show is going to double the tempting sequences in the show.

The romantic drama keeps adding the parts to maintain its holds on its fans with its highly engaging plot. Each time the show comes up with a bit complicated yet interesting plot which keeps the audience sticks to their screen. Now, Prabha Ki Diary doing with the same with its Honeymoon special going to release on 30 March 2021.

Read More  Madhuri Dixit had a romantic dinner at the beach with her husband, see photos of Maldives vacation 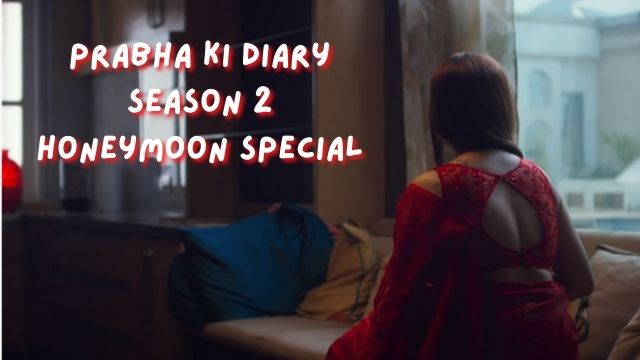 The fans are already quite excited for the next installment of the show. Well, most of the erotic shows primarily focus on intimating scenes and lose focus on the rest of the things. But things are quite different with Prabha Ki Diary as it is satisfying the audience with an adorable scene along with an engaging plot. Well, this will be the fourth installment of the Prabha Ki Diary Franchise. The trailer of the show has been released on YouTube and fetched 309,536 views along with 7.2K likes. The views and likes are showing the craze of the audience for the show.

Prabha Ki Diary Honeymoon special is going to narrate the story of an introverted girl Jessie. She finds a boy for a wedding but because of nature, she finds it difficult to open up with him. Later, they got married but still, Jessie doesn’t get close to her husband. So, as it supposed her husband got frustrated and calls one of his friends and tells them everything that is going with her and he is disappointed with his wife. The girl agrees to come to him to make his Honeymoon special. The guy thinks that she is joking at first.

But he got amazed when she comes in real. So, the fantasy of the boy is incomplete as Jessie didn’t allow him to come close to her. The boy gets into physical relation with his female friends. But after some time, his wife caught them red-handed and even slaps the boy.

It would be interesting to whether Jessi will get rid of her introverted behavior or will compromise with the situation. Catch the show on your Ullu screen from 30 March and enjoy the fabulous story of Prabha Ki Diary. Stay tuned with 9mmnews for more information and all the latest updates on Prabha Ki Diary Honeymoon Special.

Indian Idol 12 will be a big change, not judges, but the fate of singers will be in their hands

The big reveal of de Villiers, Maxwell got angry on him...

Kohli shared photo with Anushka Sharma, fans commented on this

Kohli made this big statement about Maxwell’s explosive innings

After taking 2 wickets and four catches, Jadeja made such a...

Who will be the new captain of Chennai Super Kings after...